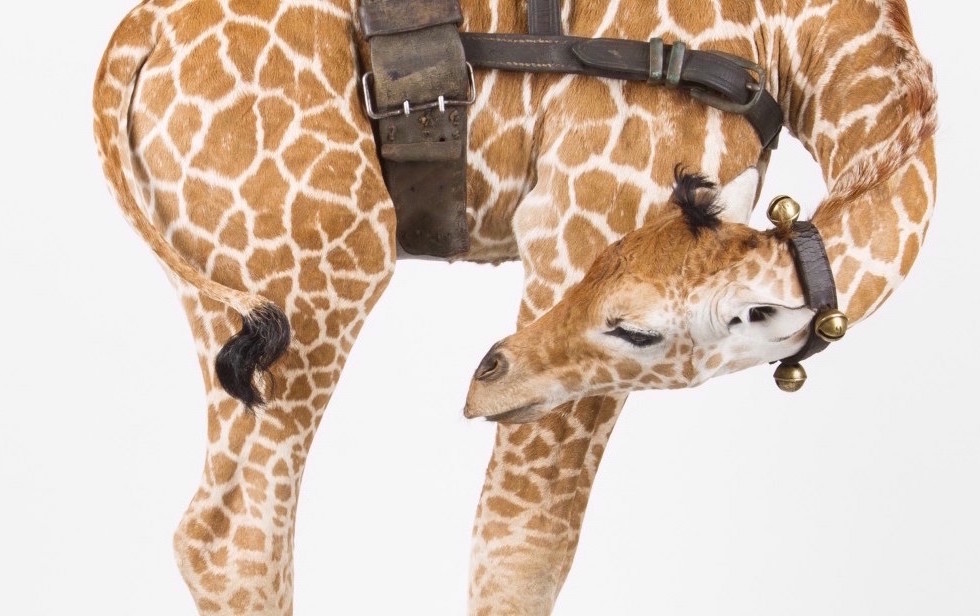 Michel Vanderheijden van Tinteren (1965) and Roel Moonen (1966) met at the Academy for Visual Arts in Maastricht, where they both graduated as plastic designers. Since the year 2000 the duo works together under the name Les Deux Garçons.

Les Deux Garçons are always looking for the perfect choice of materials and finishing of their very diverse oeuvre, which consists of collages, paintings, bronzes and assemblages. But they mainly focus on the use of taxidermy. They make their absurd, fascinating and often touching images from materials they can find at taxidermists, auctions and art dealers. They often strive for the theatrical aspect in their art; they present their deer, lambs, bears and other animals as Siamese twins, accompanied by unexpected attributes such as toy pistols, bank notes and perfume bottles, which symbolize concepts such as fear, fate and transience.

This intriguing work immediately attracts attention and raises many ethical and aesthetic questions. How emotionally involved are we with these animals that often show recognizable human attitudes? Are we sufficiently aware of their seemingly inevitable destiny or fate? Where does the dividing line run between remarkable collectibles and timeless art? Humor certainly plays a role in this work, sometimes also in a morbid way. According to Les Deux Garçons, their pieces symbolize previously made choices in life, the consequences of which are dragged along as emotional baggage and sometimes obstruct a worry-free future. This explains title choices such as 'L'Adieu impossible' ('The impossible parting'), 'La Fragilité', ('The vulnerability') and 'l'Éphémère tangible' ('The temporary made tangible') which also immediately became the titles of three exhibitions, held between 2008 and 2011 in Jaski Art Gallery in Amsterdam.

Les Deux Garçons enjoy increasing brand awareness, both at home and abroad. Their work was shown at art and design fairs, including the Salone del Mobile in Milan and the Ludwig Forum Aachen, but also in museums such as the Haags Gemeente Museum, the Stedelijk Museum Schiedam and the Schielandshuis in Rotterdam. During the exhibition 'Bloedmooi', held at the latter location, their pieces were shown with those of celebrities like Jan Fabre, Jean Paul Gaultier and Maison Givenchy. Choreographer Nanine Linning asked them in 2011 to design the costumes and sculptures for her acclaimed show 'Requiem'. A year later, Les Deux Garçons were the center of a retrospective at the Stedelijk Museum Zwolle and in 2016 they got a retrospective in the museum at the Vrijthof in Maastricht. The oevre of Les Deux Garçons can also be admired in a number of private and museum collections, including the Prinsessenhof ceramics museum in Leeuwarden and the collection of the well-known Greek billionaire Philippe Niarchos.