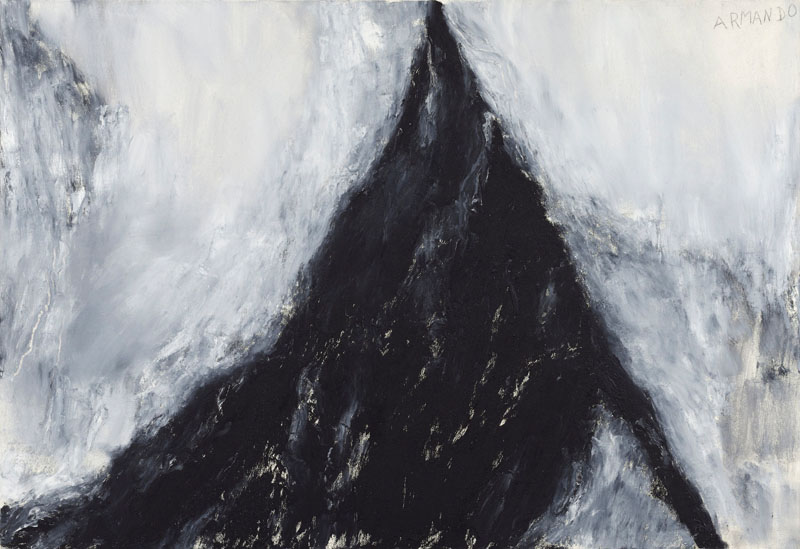 The Armando Foundation has informed us that Dutch artist died on Sunday July 1st. Armando was part of the Nul movement in the 1960s and then continued as a painter.

Armando was born as Herman Dirk van Dodeweerd on 18 September 1929 in Amsterdam. Armando's oeuvre always originated in the dark shadow of World War II. He grew up in Amersfoort, near a concentration camp of the German occupiers. He saw how prisoners were taken to the camp and reported on this in the book 'De Straat en Struikgewas', for which he was awarded the Multatuli prize in 1988. In his early work, bolts, rope and barbed wire were often present, regularly in the colors black and red. Later he started painting, each time with a very limited color palette. His often monumental canvases bring peace, but also carry the original sin of his generation and those for him.

Armando was also appreciated as a violinist and was also active as a poet in his early years. As a writer he also received a lot of attention in the 70s and 80s and in 1977 he received the Herman Goorte Prize for poetry and in 1985 the first Jacobus van Looy award for literature and visual arts. Two years later he received the Gouden Ganzenveer for his contribution to Dutch cultural heritage and its distribution in Europe.

Armando died in the German city of Potsdam, where he had a home and a painting studio. He was 88 years old. His work can be admired in numerous museums and a large part of his collection is shown in the Oud Amelisweerd Museum in Bunnik, The Netherlands.