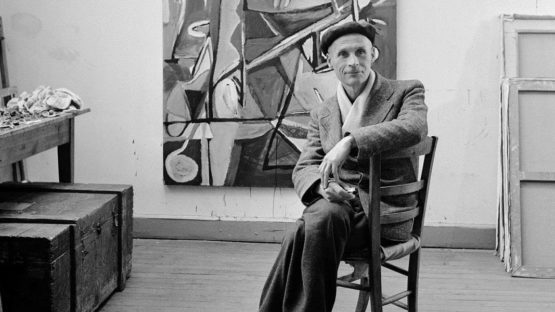 At a very young age van Velde worked from 1907 in the painting and decoration Studio Van Schaijk, where he got his first painting education. When he was twelve, Bram started working for a home furnishing company to meet the needs of the family. As a natural talent, he copied the old masters and decorated furniture and lampshades for his firm. His employer had an eye for his great talent and encouraged him to develop it further.

With the support of his boss, Bram leaves to Germany and settles in the artists' colony of Worpswede. Here he made, besides a number of paintings in expressionist style, his first lithograph: a self-portrait. It appears in an edition of the artists' colony in an edition of 500 copies. In 1924 he leaves for Paris together with his brother Geer (Gerard). Paris is van Veldes' big school, where his career increasingly took shape. When he moves to Corsica in 1930, another world opens up. Corsica becomes a source of inspiration, especially for still lifes.

After the Second World War Bram van Velde got his first solo exhibition in Paris. Although late in his career, the appreciation for his work grew rapidly. Exhibitions followed each other. Bram van Velde died in the south of France at the age of 86. He is buried there in Arles.