Roger Raveel was a Flemish post-expressionist painter. His work belongs to the New Figuration movement and is considered to be related to pop art.

In 1948 he founded La Relève group with Jan Burssens, Kamiel D'Havé and Pierre Vlerick. He felt that he had to look at everything again and look at things in a different light. Influences of data from physics and new technical developments gave Raveel a different view of the world. He wanted to make that new world view visible in his art, which thereby acquired a very special and specific design and content. This process happened together with artists such as Etienne Elias, Reinier Lucassen, Raoul De Keyser and Alphons Freijmuth. The approach was called "The New Vision," later seen by many as part of the New Figurative Movement.

In the period 1955-1961, Raveel mainly worked in the abstract. From 1960 to 1962 he made study trips to Italy where he worked and exhibited with artists such as Lucio Fontana and Asger Jorn. The cellar fresco in the Castle in Beervelde was the first highlight of the 'new vision', alongside the Dulcia project by Zottegem in 1969. The artist received praise from many angles for his creations until his death. His work can be admired in various museums and there is also a Roger Raveel Museum dedicated to him. 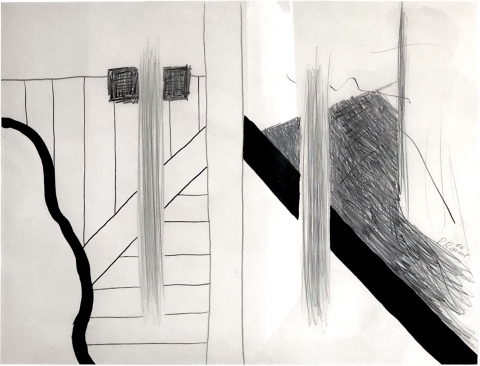